Working As a Tattoo Artist 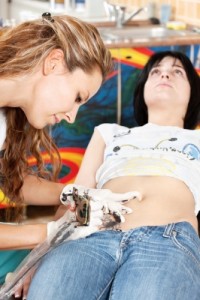 Image courtesy of Marin at FreeDigitalPhotos.net

Tattoos have never been more popular than they are today. Every other celebrity seems to sport tattoos – from Angelina Jolie to David Beckham to Johnny Depp – and shows like “Miami Ink” and “L.A. Ink” have become popular television programs. Fifteen years ago, there were only 12 tattoo shops in the Vancouver Lower Mainland; today there are more than 30 shops.

No one seems to have sacrificed more for the art of tattooing than Shoko Sonoda, a sprightly 37-year-old native of Fukuoka, Japan. Sitting comfortably in her second-story studio at 906 West Broadway, her hair tucked under a knitted cap, both arms emblazoned with colourful tattoos of koi fish, lotus flowers, and Japanese maples leaves, Sonoda tells me she apprenticed to a tattoo master in her home town nearly 14 years ago.

Tattooing in Japan has existed since the 7th century, but didn’t become an accepted art form until the 1700s. The craft is learned through apprenticeship whose arrangement is straightforward: the apprentice works for no wages, and must do everything the master tells him to do. In exchange, the master passes on his skills and know-how to the apprentice.

In an ancient profession dominated by males, Sonoda was undeterred. Since getting her first tattoo at the age of 18, Sonoda was hooked, and knew she wanted to become a tattoo artist. But Sonoda’s sunny disposition quickly fades when talking about her experience as an apprentice, days when she worked “24/7, 365 days a year,” averaging four hours’ sleep a night. She only had one day off, and that was on New Year’s day, an almost sacred day in Japan when the entire nation goes into holiday mode. Sonoda used to sleep with her cell phone by her ear just in case her master beckoned her. “My master called me once at 5 a.m. after a heavy night of drinking. He asked me to accompany him for a bowl of ramen noodles. I couldn’t say no.”

Sonoda’s experience as an apprentice seems to come straight out of a Hong Kong kung fu flick: she spent hours mopping the floors, washing the toilets, answering the phones, cleaning the equipment, and when she finished her chores, only then was she allowed to observe her master at work. No questions were allowed. You watched, you observed, and you listened. And you spoke when spoken to. Those were the rules. “It’s similar with other apprenticeships in Japan,” Sonoda says. “I suppose it’s like learning to be a sushi chef, kabuki actor, or even a sumo wrestler.”

After two years as an apprentice

Sonoda’s tattoo master had a rather unusual condition: apprentices had to continue their tutelage until he personally released them, but not one day sooner. After two years, Sonoda felt it was time to leave, but her master wouldn’t hear of it. Her master, a renowned tattooist, had a clientele comprised mostly of Yakuza gang members. (Yakuza gangsters routinely get tattoos to symbolize clan allegiance.) Sonoda’s master wasn’t a man who could be taken lightly.

Nonetheless, Sonoda wanted to end her apprenticeship, even if it meant being ostracized from the tattooing community. Sonoda also felt for her physical safety. So she decided to leave Japan. She bid farewell to her parents, told them not to worry, and boarded the next flight for Canada.

In 1997, Sonoda landed in Prince George, a place she knew nothing about. Sonoda didn’t only encounter culture shock, but weather shock – she’d never lived through minus 30 degree Celsius winters. But Sonoda chose an ideal location – she couldn’t be found. Soon after Sonoda fled Japan, her master contacted everyone he knew – including Sonoda’s mother – demanding to find out Sonoda’s whereabouts.

Sonoda couldn’t adapt to life in Prince George, and upon a friend’s suggestion, she made her way down to Vancouver, a city vastly more multicultural, not to mention milder in climate. Here, Sonoda thrived, where she practiced her art at Sacred Heart Tattoo, one of the city’s long-established tattoo shops. It was also at Sacred Heart where Sonoda met Steve Uhreniuk, 38, a cabinet-maker who happened to be at the shop one day building a new counter, a man who would be her future-husband.

Sonoda spent six years at Sacred Heart, where she refined her craft in tattooing dragons, onis (Japanese demons), cherry blossoms, geishas, lotus flowers, samurai warriors, and a host of other oriental designs. Tattooist Mikel Johnson, 39, a former Sacred Heart colleague, says it was a rare opportunity to work alongside a tattooist from Japan – after all, it’s the land from where tattooing evolved into a sophisticated art form.

Johnson recalls how disciplined Sonoda was – her meticulous nature, her punctuality, her courteous manners. “So very Japanese,” says Johnson. “We all tried to make her more Canadian!” laughs Johnson. He mentions the time Sonoda noticed some of the Kanji characters displayed in the shop were incorrect, but was afraid to speak up for fear of being disrespectful. After conferring with Johnson, Sonoda finally told the shop owner.

Sonoda found the tattooing community in Vancouver progressive and supportive, where tattooists shared ideas and information – a far cry from Japan where the culture was secretive and old-fashioned. In fact, customers rarely got to see the design before getting tattooed. A customer would tell the tattoo master he wanted a dragon covering his upper chest and shoulders, and the tattoo master would create the tattoo according to his own artistic sensibilities. The customer had to have complete trust in the tattoo master. “A customer might ask that a dragon be coloured in red, but that’s it!” says Sonoda.

In 2006, Sonoda decided it was time to strike out on her own. Sonoda had married Uhreniuk, and the couple was raising their then-two-year-old son, Kai. Sonoda established her own studio called Sumi-ya (“sumi” means ink, “ya” means shop) so that she could have better control over her time. Sonoda describes balancing her work and family obligations in one word: “Chaos.”

Sonoda admits she constantly thinks about her work. “I’ll even think about a customer’s tattoo design while in the shower,” she says half-jokingly. After an initial customer consultation, Sonoda will spend the next day or two sketching designs, experimenting with an array of colours, drawing different shapes. “It takes a lot out of you,” says Sonoda. “I’d like to be able to give my full attention when I’m with my son, but I can’t help it, at times my mind will drift to my work.”

Sonoda charges $150 per hour which is the going rate for tattoos in Vancouver. “We don’t make as much money as people think,” says Sonoda. Since she works on her own, Sonoda has to pay her own overhead, equipment and supplies, and insurance. The hours can be long, where an average tattoo session can last between four to six hours. A tattooist must devote intense concentration and work with a steady hand. Mistakes aren’t an option, and there’s no erasing a tattoo.

When a tattooist works on a customer, she sits hunched over in a stationary position, her face no more than 20 centimeters away from the area being tattooed, her eyes fixed on the precise spot where the tattoo will be inked. The tattooist takes a 250-gram, 110-volt tattoo machine, dips the machine’s needle into ink, and drills the needle into the skin, depositing ink just below the epidermal surface, where it will remain for the rest of the person’s life. Every so often, the tattooist will take a towel soaked in water and alcohol, and wipe away the excess ink and any blood seeping from the punctured skin.

Over time, Sonoda says, most tattooists suffer from neck, lower back, and wrist pain, and sometimes even tunnel carpel syndrome, developed from years of grasping and holding down a vibrating tattoo machine all day long. “You can’t work more than five days a week,” says Sonoda. On her days off, Sonoda actor or acupuncturist for ailments which are obviously work-induced.

Sonoda wouldn’t trade this line of work for anything else. She’s happiest when chatting with customers, suggesting designs, helping them visualize the kind of tattoo they desire. Sonoda recently worked on a customer in his 70s who wanted to touch up a faded tattoo from his days in the navy. “The tattoo was older than my age!” says Sonoda, breaking out into laughter.

Sonoda achieves a deep sense of fulfillment from her chosen career path. “Every single piece I do is different. I feel honoured that someone is wearing my art – for life. And even after 14 years of tattooing, I’m still learning.”

Despite the countless hours, the back pain, and sore wrists, Sonoda says it’s her passion for this art form which drives her and compels her to improve her craft.

“At the end of the day, it’s not worth it unless you love it.”

Below are helpful articles pertaining to resumes, careers, and education. I cover topics ranging from how to improve your resume, to how to prepare for job interviews, to what to say (or ask) during job interviews. These topics usually pertain to questions that I get from my clients. If you have a question that is not covered in my blogs, please feel free to email me at milton.kiang@gmail.com.

Use our email form to quickly get in touch.